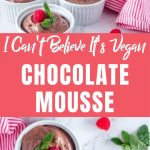 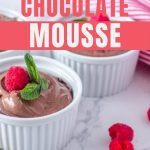 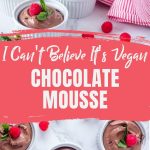 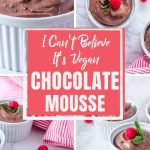 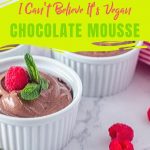 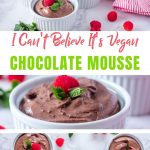 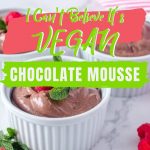 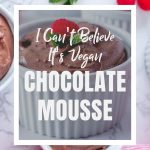 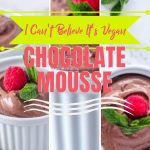 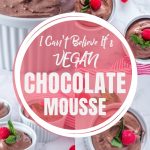 Chocolate mousse is thought to have originated in France. The original name was “Mayonnaise de Chocolat” thanks to its creamy and airy texture which was made by whipping cream and using egg whites to create a light foamy mousse.

Our recipe removes the eggs and the dairy and uses aquafaba to create a decadent chocolate mousse that even non-vegans will love.

What is aquafaba chocolate mousse made from?

“Aquafaba” comes from the Latin words for water and beans. It was coined by an American software engineer called Goose Wohlt in 2015. He saw a YouTube clip of two French chefs making chocolate mousse using the water from chickpeas and used the concept to create meringues.

Since then, aquafaba has been taking the vegan world by storm, and vegans and those with food intolerances can now enjoy traditional dishes like chocolate mousse and marshmallows.

If the word “marshmallows” caught your attention, try our Vegan Marshmallow Recipe.

No need to worry about whipping cream and egg whites, this recipe is really easy and just takes a bit of patience when it comes to whipping the aquafaba and waiting for the mousse to set. It makes 6 small ramekins.

Here are a few tips to help you.

Plan ahead – the mousse takes 6 hours to set

If you’re planning this recipe for dessert after dinner, plan ahead so that the mousse has enough time to set in the refrigerator.

Use a double boiler to melt the chocolate

You might be tempted to cut corners and melt the chocolate directly in a saucepan. But, the problem is that if you are not careful, the chocolate will burn.

If you don’t have a double boiler, it’s easy to make one. All you need is a pot and a bowl that fits into the top of the pot so that it’s suspended above the water.

Fill the pot about halfway with water, and bring to a simmer. Place the bowl over the pot so that it’s just above the simmering water. Put the chocolate into the bowl and let it melt slowly. Be careful not to get any water into the chocolate.

Alternatively, use a microwave

It’s quicker to use a microwave to melt the chocolate, but it’s important to keep an eye on it so that the chocolate doesn’t burn.

Keep whipping the aquafaba and sugar until soft peaks form. It takes longer than egg whites, but keep going until the meringue-like peaks form. 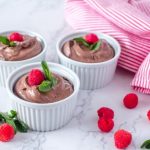 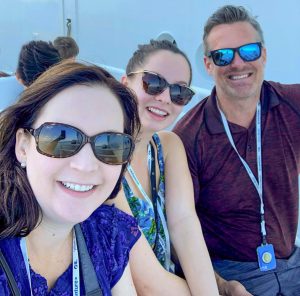